Military/Government: The town of Passburg and the land 5 miles in every direction is a fief held from the Duchess by Lord Wulfric of the Pass. He lives in a keep overlooking the town, and collects tolls and land tax from the town to supplement that from his farming vassals. The armorer and blacksmiths of the town are also at the keep, and are employed by the lord. He has 5 household knights at the keep, and 5 other knights hold houses in the town as vassals. He has 20 full-time soldiers at the keep too with another 20 making up the town garrison. The gates and night watch are manned by town-folk militia.

The economy of the town is reliant on the agriculture of the surrounding farmland and service to the caravans that pass through and supplying explorers and settlers. Most things are hauled in and there is very little manufacture or handicraft in this town.

Gangs: There are 2 small criminal gangs in town: The Ruddy Dozen specialize in pickpocketing travelers and caravans and the Glorious 5 in extortion and work for hire.

1–Temple of Nodens The High Priest Ceredic is a fighter-cleric who runs this temple with no other clerical help. He has several servants and some part-time militia guards. He has made it a mission to encourage and offer guidance to expeditions heading into the Wilds of the Great Vale to settle or to hunt down evil.

2—Temple of Ourania: The High Priestess Malora and 3 under-clerics run a temple, with attached theatre. In addition to serving the spiritual needs of the town, she sponsors poetic exhibitions and competitions on a regular basis,

3—Wanderians Lodge: This lodge of the magic guild is run by a man named The Verge and his 2 apprentices, Chuck and Winkle. It’s chiefly used by travelling members of the guild on the road from Emporion to Algart. It has a basic library.

4—Old Doctor Smedley: a skilled herbalist, he is 95% likely to have a quantity of any healing-related herbs.

5—The Witch of the Pass: mysterious woman who sells all manner of herbs, and the occasional potion. She also sells special item called a Rowan Shield (or Witch’s Shield). If the user of the shield fails a saving throw against a magic spell, he/she can sacrifice the shield (causing it to break) but earning a second saving throw. Each shield costs 75gp.

6—The Cat House: the home of Mrow, a feline magic-user.

11—Joe’s Tavern: a good refreshing ale, but little else. Run by Honest Joe.

12—Steve’s Delicious Suds: any sort of beer, ale or mead you might imagine. Run by Meticulous Steve.

15—The Watering Hole: the bad bar, run by Emil Muzz.

16—Frontier Construction Limited: Paul Swift runs a business specializing in building in the Great Vale. He has built many of the farming villages and blockhouses to the west, as Thranconia expends slowly that way. He also has built things for the lords around Crossroads Tavern. He’s looking for someone who wants to have castle built, that’s where the big money is.

17—The Shovel Brothers: Gruk and Morgo, a pair of Cyclopian brothers have organized a unique mutli-species construction company. They are sometimes competitors with the Frontier Construction, but are often engaged in building and tunneling up in the mountains.

18—Jenny’s General Store: Jenny keeps a store of all manner of ordinary goods and furnishings, sending her gnome employees to Emporion to restock every other week.

19—The Clearing House: used good re-seller. Mark Downs, the owner, buys used goods for 1/3 of list price (10% if he suspects they’re stolen) and sells them for 50% of list. There is a 1 in 6 chance that any such item fails the first time it matters.

20—Peddler Square: every other day, this square fills up with peddlers selling small goods and farmers selling food and other agricultural products.

21—Passburg Keep: residence of the lord and his household. 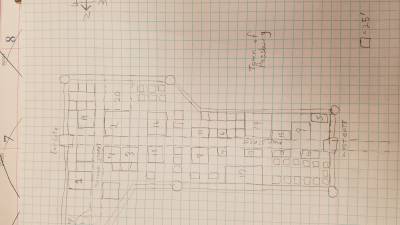