The campaign is set in Eastern Texas in the year 2055 AD. The majority of the landscape is untamed wilderness, crawling with wild animals, mutants and drifters. There are, however, 9 major areas that are noticably different than the rest of the countryside. Each of these regions is about 25 mile diameter circle.

MAP OF THE REGION 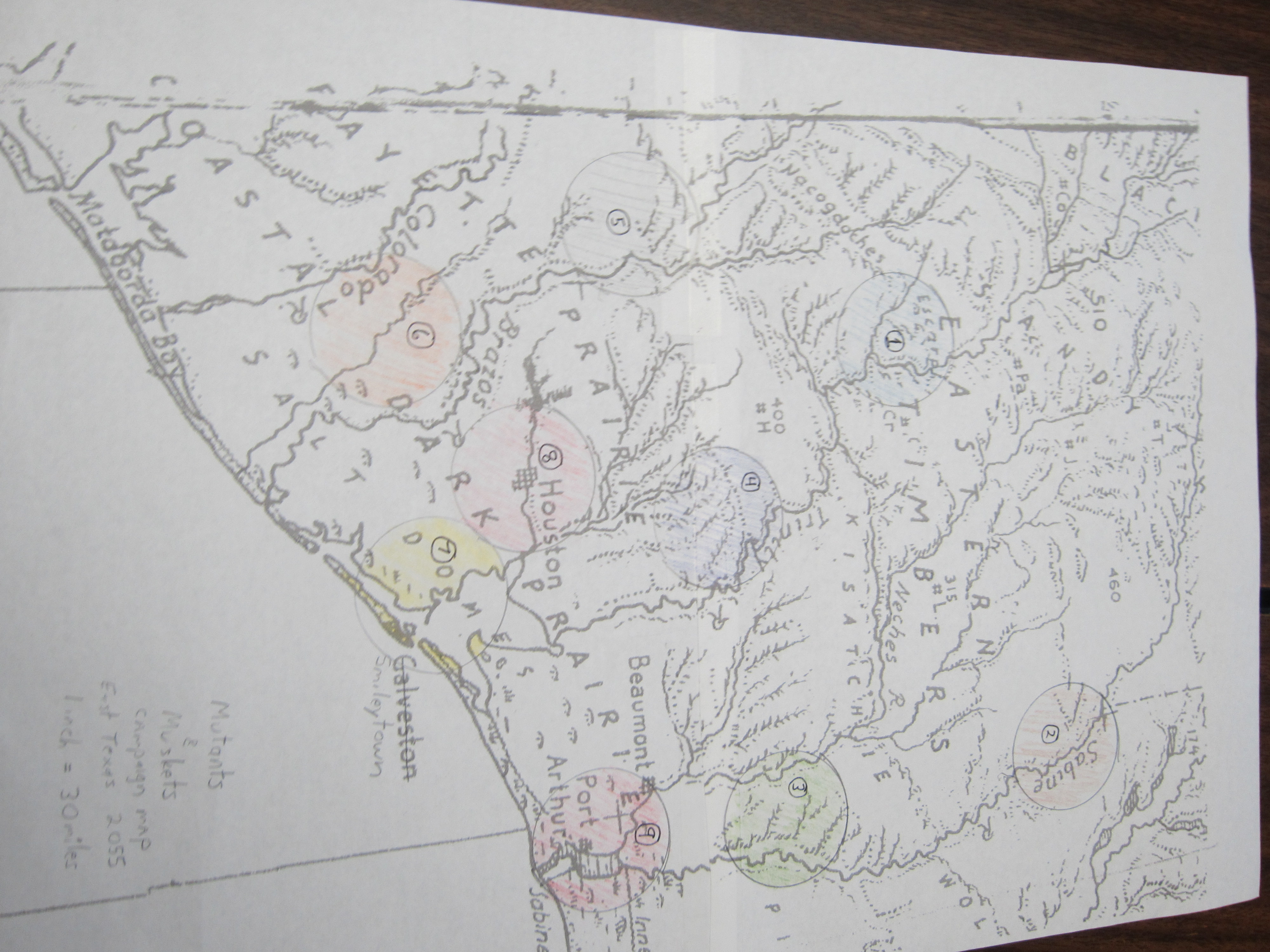 1–Scarptown: the region around the PC's hometown, set along the Nacogdoches Escarpment at the fork of the Trinity Region. When entering this area, one is likely to encounter the marshal's patrols.

2–The Upper Sabine Brotherhood of the Lord: in the upper Sabine River valley is a community of people who follow Red Foley, a preacher who has built a tight-knit farming community. Almost as isolationist as the Scarptowners, they are nonetheless very hospitable to strangers and travelers, granting them three days rest and food before sending them on their way. The only exception are mutants, whom they kill on sight. On occassion, Brother Foley leads out “The Posse” to scour the wilds for mutants to destroy.

3–The Lower Sabine Homestead League: In the lower reaches of the Sabine valley, between the Neches and the Sabine rivers is an alliance of independent homesteads. Each farm contains 20-50 people, and each is strongly fortified. Besides the fact that each is a farmstead, and that each is honor bound to come to the aid of the other in time of need, there is little that can be said in common about them. Some are nasty little tyrannies, where a strongman captures people to slave on his farm, others are friendly, generous extended family enterprises.

4–The Damned Dirty Apes: in the hills along the Trinity River north east of Houston is a band of humanoid mutant apes. They are cruel, violent and extremely xenophobic. There orgins are a mystery, but their economy consists of them capturing humans to slave on their fruit farms. They occasionally trade with some humans, but are sworn enemies of the Upper Sabine Brotherhood.

5–The Cowboy Reaches: bands of nomad cattle and horse herder in the Fayette Prairie have their round-up gatherings at Filthy Sanchez's Trading Post on the Brazos River. In the area around the upper Brazos, one is likely to encounter such groups of cowboys.

6–The Neo-Apaches: Along the Coastal Dark Prairie roam bands of hunters called the Neo-Apaches. Founded after the disaster by a charismatic survivor with a small amount of Apache ancestry, most of the Neo-apaches are actually Mexican by ancestry. They hunt wild cattle and bison in the prairie and are deadly enemies of the Cowboys.

7–Smileytown: the former Galveston Texas on the islands along the gulf of Mexico has been renamed Smileytown by its tyrannical dictator Rick Hartman. The town depends on its fishing fleet.

8–The Houston Forbidden Zone: the area around Houston has become a deadly haunt of mutants and unspeakable danger.

9–The Beaumont-Arthur Forbidden Zone: The area from Beaumont down to Port Arthur is likewise a locus of extreme danger.